This article from Marie Haynes first appeared on SeoMoz. I could have just “linked” to it, or posted in my social media outlets; but I believe it’s TOO IMPORTANT to let slide by change. This article is (I believe) a MUST READ for all us “internet marketers” and small business owners together.

I’ve been noticing a disturbing trend lately. I have been talking with a number of small business owners who have a story that is similar to the one that I have written below. In fact, the story below was created by taking real information from clients of mine (with their permission, of course). I fully expect that this post will have its share of thumbs down, but I thought it was worthwhile to write it in the hopes that it will help some small business owners from suffering like Joe, in my story below. 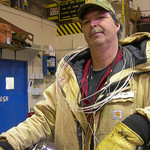 Joe is a plumber. He has worked hard to learn his trade. In the year 2004, Joe decided to get a website made for himself. He paid a local firm to create it. At the time, it was one of the few plumber websites in existence in his town and it brought him some good business. By 2011, every plumber in town had a website and Joe’s website had a lot of competition. He was on the first page of Google, but near the bottom. He rarely got business directly from his website.

Joe was curious as to why some websites would be favored by Google. What could he do to appear higher on a Google search for plumbers in his area? One day, he got a call from an SEO firm. The man on the phone asked him if he would like his website to appear at the top of a Google search. Of course he did! He decided to hire the firm. They told him that they would build backlinks to his site as a site with lots of backlinks would look good in Google’s eyes.

A few months went by, and Joe started to get more and more clients from the internet. The SEO company’s work was paying off! By this point, Joe’s website was number 4 on a search for plumbers in his area. The SEO firm asked him if he’d like to step up the game a little and have them build even more backlinks. To Joe, this was an easy decision. The ROI for him was substantial so far. So, he paid the company even more money and they went to work building more backlinks for him. A few months later, Joe was the number one plumber in Google for a lot of search terms.

He got so much business from this number one position that he decided to hire on extra staff. He hired a receptionist and two more plumbers. He bought two extra trucks and a bunch of tools. Business was booming! He also invested in a lot of offline advertising which encouraged everyone who saw it to visit his website. Life was good.

Then, near the end of April, 2012, the phone suddenly stopped ringing. He got some business from his offline advertising and from repeat customers, but he was puzzled as to what had happened to his internet traffic. And worse yet, he could not find himself on Google for his regular search terms. It used to be that when he type in “plumber” he was number one…now he was on page six. And the same thing was happening for “plugged toilet in [his town]” and “burst pipe”. What was going on?

His SEO company told him that times were changing in the SEO world and they had to step up his linkbuilding plan. More directory links! More articles! (Now, I know that this seems ridiculous to you and me, but believe me, I have had several clients whose previous SEO companies have told them this type of nonsense.) Joe was desperate to get his online traffic back and so he believed his SEO company and told them to get more and more links.

Joe contacted me to ask if I knew why his site’s internet traffic had dropped. Here is what I saw when I looked at his organic traffic on his analytics data:

It was pretty obvious to me that his site had been affected by the Penguin algorithm. (He possibly had a couple of Panda issues as well, but Penguin was the biggest concern.

The next step was to look at his backlink profile, arranged by anchor text in Open Site Explorer:

That’s not good at all. The rest of the list was almost all anchor text. His URL didn’t even appear as a backlink in this list!

I had to give Joe the bad news that his site was most likely a victim of the Penguin algorithm update. This was probably because of the backlinks that his SEO was building. Additionally, it looked like his SEOs had taken some of his articles from his website and republished them across the web, ending each article with an anchor text link back to his site. This duplication of content could possibly be contributing to a Panda problem.

Here was Joe’s response in an email to me: 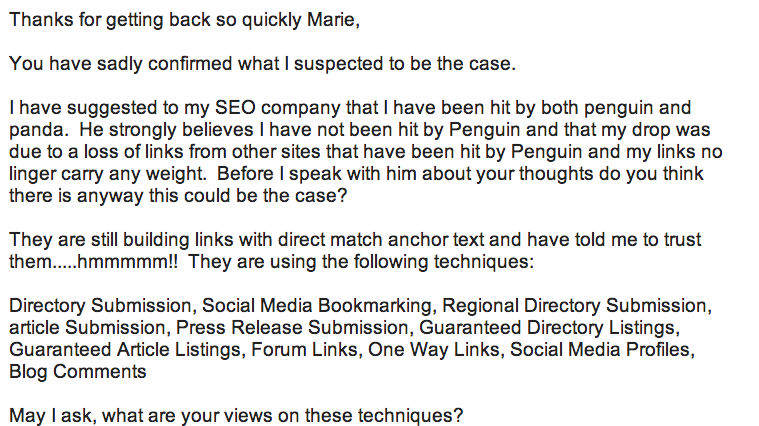 How frustrating!!!! Those are all techniques that have long been accepted as “the norm” by many SEOs. But, they are mostly techniques that violate the Google quality guidelines. Specifically, these points:

A link profile that is made up of links like most of the ones mentioned above is one that is just asking to be penalized. As I see it, the whole goal of Penguin is to penalize sites that rank simply because they’ve got an SEO who knows how to build links, and to reward sites that provide an excellent experience for the Google searcher.

Unfortunately, recovery would be extremely difficult for Joe. If this were a manual unnatural links warning, he could try to contact webmasters and get a portion of the links removed. If he documented things well, Google may remove the penalty. But, as Penguin is an algorithmic problem, most likely the only way to get rid of the damage done would be to get 85-95% of the links removed. (No one knows for sure what that number is, as we have limited data on Penguin, but this is what is widely believed.) With over 800 unnatural backlinks that would be extremely difficult! I have found that my attempts to get webmasters to remove links usually results in about 15% success, and sometimes higher depending on the niche. The cost and effort involved with getting 800 links removed successfully would be astronomical!

Unfortunately, Joe is going to have to get a new website built. And, he’s going to have to start over again at getting links to his site. He won’t be able to 301 redirect visitors from his old site to his new one because he will be redirecting the Penguin issue as well. He can put a link on the old site telling people his site has moved (so that he can still capture customers who responded to his offline advertising), but that’s not an ideal solution.

Joe will probably need to lay off the majority, if not all of his staff because the work is just not there for them.

So, what can a small business do to get ahead?

The game of SEO is really changing. It used to be that anyone could call themselves an SEO and could very easily build backlinks via the above methods. A lot of people believe that those types of links never used to work, but I have seen a number of sites that were ranking well in competitive niches by using those techniques….until now.

For the small business owner, be really careful when hiring an SEO. If you are thinking of hiring one, here are some tips that I can give you:

What do you think?

The world of SEO is changing! I believe that the day is coming when there will be no easy ways to get backlinks. A good SEO knows how to network and where to cultivate links. And better yet, a good SEO can help with content creation that is going to attract natural links…and then promote that content!

But what do you think? Will today’s linkbuilding strategies last? Are SEOs who use these tactics likely to cause their clients to get penalized? And more importantly, are poor quality SEOs destroying small businesses?

*Note: Joe is not real. The picture I used is of a plumber…but it’s a photo with a creative commons license courtesy of flickr. Joe is make believe, but his story is not…I’ve come across this story a number of times.

Sign up for The Moz Top 10, a semimonthly mailer updating you on the top ten hottest pieces of SEO news, tips, and rad links uncovered by the Moz team. Think of it as your exclusive digest of stuff you don’t have time to hunt down but want to read!

Post note from Paul: I too have come across this story time and time again. Folks, if you’ve got someone trying to sell you backlinks, backlinks, backlinks… tell them to piss off! The key to SEO success is found in offering GOOD QUALITY content on both your site and other related sites offering VARIETY. No “ifs” no “buts”, that’s just the way it is.