STOP – Think About What You’re Thinking About

Home > Business Basics  > STOP – Think About What You’re Thinking About

28 Nov STOP – Think About What You’re Thinking About

There are many different aspect to personal and business success. Most of the articles I’ve read recently seem to focus more on the tools that we use rather than the one who wields them –

So let me ask you, how effective is a chisel and hammer in the hands of someone whose only a 1 year apprentice in sculpture? How well does than man or woman’s workmanship compare with the master sculpture?

Not well would me my guess.

Here’s the point – it doesn’t really matter how many “tools” or how many “techniques” or how many “programs” you’re got hold of if you yourself are not well skilled in using them. This of course is simple basics. But this philosophy also extends to the ‘why’ to use them, the ‘when’ to use them, and most importantly the ‘ability’ to use the consistently and without failure.

This is where ‘think about what you’re thinking about’ comes into play.

Have you ever been real excited about something new that came your way? Remember the last time that you made that commitment to purchase the latest program Online that promised success and after reading the sales copy you really believed that it would work for you… this time!

I remember such thought. We’ve all had them. But for some reason it doesn’t always seem to work out that way, does it.

Because it’s too easy to get side-tracked.

How do we make change to the way we think and feel about ourselves when we’ve been thinking and feeling that way for 20, 30, even 40 or more years?

The FIRST STEP is to start thinking about what we’re thinking about; we must become aware of what kind of thoughts are going through our minds at different times of the day. We must look and see just how (if at all) our thoughts are influenced by external things – for example, when I’m tired (and I don’t mean body tired time for sleep – I mean brain tired middle of day want a nap) I’m not quite so “positive” as I might be earlier in the morning. I’ve learned that my problem solving abilities are way reduced middle of the afternoon. Knowing this I can shift my day timetable to work in with such limitations. As I said, making change to the external is easy. 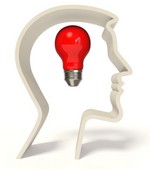 When dealing with the internal though, the SECOND STEP is to question, or “challenge” thoughts that are not productive. For example, self-doubt is one of the greatest limiters that we can face within ourselves… no matter how much we want something to work, if we don’t believe we can make it work it isn’t going to work!

When you begin to notice those types of thoughts coming your way you must stop them in their tracks and ‘challenge them’.

You might say something like , “Hey! This isn’t the way you think any more!” And I love to say STOP-POINTS out loud for better effect. You can also throw in your own name to make it more personal…”Stop Paul – you don’t have to think like that anymore!” And that breaks the thought pattern, giving me a chance to then DO something with it.

But what if I don’t actually believe it… what if I still *think* that I (am a loser, aren’t worth it, not able to do it…) etc. Then you can rephrase like, “Hey! Stop it Paul – you know this isn’t who you want to be. Stop thinking like that!” Again, giving yourself a chance to break the pattern.

It takes practice but it can be done. It’s a great habit to get into.

But then what? Next you must immediately SHIFT-FOCUS. That means draw your mind away to another thought which is more positive and rewarding.

Believe it or not, but I used to have a real problem with all this stuff. As an ex-alcho I haven’t always been the man that I wanted to be. I haven’t always been the father that I wanted to be, or the friend, or the businessman. Self doubt was huge part of my life. I used to wake up in the middle of the night regularly following terrible dreams which cut deep into my heart and kept me away hours longer. It was during this time that I came across the concept of STOP-POINTS and SHIFT-FOCUS. And being that I has become tired of sleepless nights I decided to DO something about it.

Before bed each night I’d read a quotation or scripture or phrase – anything that might have positive connotations. I’d read this before bed, and then if I woke up that night having nightmares about my (it felt like) failed life – then I’d speak out loud to myself and STOP that thought from continuing. I’d then immediately SHIFT focus to something more positive.

It took many months of practice, but eventually I gained control. After a while, the dreams themselves fell away.

The question for me though, was, could I also do the same thing during the day during my ‘normal life’. Yes.

And so I began to do so.

When I got back into building my business I had some doubts about how things would turn out, it had been four years after all…. (negative thoughts so easily come into our minds).. but I continued to use my stop points and shift focus to better things.

In essence, I began writing my own “script” in my mind instead of letting negative though patterns write it for me.

The results have been far greater joy, success and happiness than I previously thought possible. It al began however with a single thought that said, “I don’t want to think like this anymore”.

Which is why we must be so aware of our thoughts. Because without awareness, if we’re not “thinking about what we’re thinking about”, then our minds can so easily run off on their own tangent –

Just like life really. If we don’t keep track of it, it’ll take us wherever it pleases. The key is understanding that it all begins in the mind.