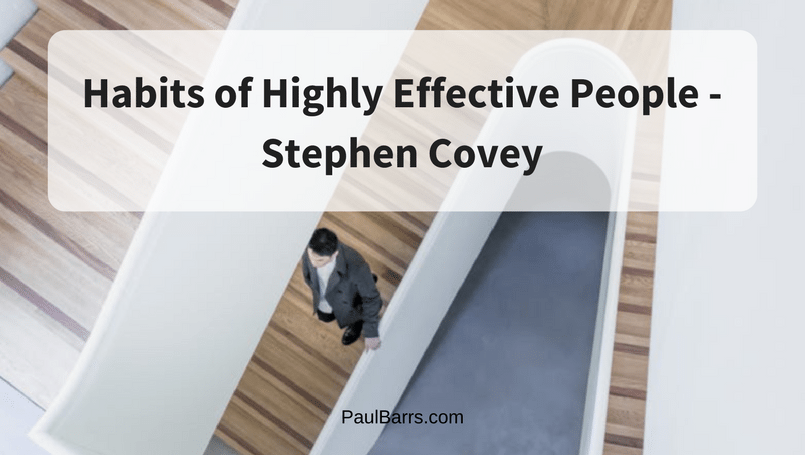 Posted at 06:00h in Business Basics by Paul Barrs

Stephen Covey, a legend in his own right, and a trainer / mentor to millions – including me! If first came across his training when he released his book “The 7 Habits of Highly Effective People”. Did it change my life? No… but it did make a difference. I am still reminded often today the Fifth Principle “Seek first to understand before being Understood”. At least that’s how I remember it. It’s one of those things that I still struggle with today.

And so, even after nearly 30 years in business, both working for others and for myself, I am still learning every day. This video is is the first that I will post in a new series… “My Mentors”, from Stephen Covey.

Stephen Covey: A paradigm comes from the Greek root paradeigma. It basically means a pattern, a model, a representation, something that stands for something else. It comes from the mental image you have in your mind of the way things are out there, and the images we carry in our heads of the way things are, of reality come basically from our own backgrounds, our own experiences.

All of us think we see the world as it is. In fact, we see the world as we are. We project onto the outside world our environment, the people we associate with, including how we see ourselves, we project, out of our own conditioning experiences, our background, a certain representation, a certain model, a certain set of expectations, a certain assumption on that reality out there, and we think that’s the way it is.

I might describe myself or you or a situation as if I am describing it as it is. In fact, I am describing myself, that is my perceptions, my frame of reference, my world view, my value system, my autobiography, and I’m projecting it upon the outside.

Now let me give a very simple, layman’s way of looking at a paradigm. It is a map, like a map of this hotel or a map, let’s say, of Portland. I’ll ask this gentleman. What would you do if you came here to Portland and you have no information at all about this place, and you were given a map where you rented the car, and it was a map of Seattle, but on the top it said Portland? What would you do? See, you don’t know otherwise. You’ve never been here. You have no other source of information.

Keith: I would hopefully ask for a little bit more direction, other than just what’s on that map, maybe have them start me out.

Stephen Covey: Okay. The person at the desk said, “Sorry, sir, that’s all we have, and it’s late at night. Good luck to you. Here’s the keys to your car. It’s right across the street. It’s in number 14, and if you’ll follow this map, you’ll be able to find this hotel that you want to get to.”
Okay. Now just assume that you call your buddy here up on the phone, and he knows that you got that map, and he says to you . . . what’s your first name?

Keith: I’m going to get nowhere twice as fast.

Stephen Covey: You call him back in a state of total despair and discouragement, and you say to him, “I have never been so confused and so lost in my life, and I am following this map to the hilt and I have doubled my speed. I’m lost twice as fast.” He senses you’re discouraged. You’re really down. You’re almost ready to give up. It’s despairing. And he says to you, “Think positively.” He gets you just jazzed right out of your gourd. I mean, he says, “You can do this thing. Rise to the occasion. Do it.” That’ll do it?

Keith: That’ll do it.

I remember I was giving a speech a little while back, and there was someone on the front row just constantly talking to another person, and my mother was two rows behind, and she was so upset that here her precious son was being so ignored, so blatantly, so openly, constantly, and would not end from the very moment I began to the end of my speech, just constant talking. And it just totally discombobulated her own listening, and she felt like taking her purse and reaching two rows ahead.

Anyway, she went up afterwards to the person that was running the conference and, “Did you see that? Did you see what was happening? Can you believe that right there on the front row that . . .” “Yeah, I know. She’s Korean. That’s her translator.”

I was on a subway, very, very large metropolitan city, Sunday morning. It was quiet and sedate, bunch of young kids running in the subway. The father follows. He sits near me. The kids just go crazy on that subway, running up and down, turning people’s papers aside, just raucous and rude. I’m sitting there, “Oh, I can’t believe this.” He does nothing. I look at my attitude, see, attitude and try to control. But look what I could see.

After a few minutes, attitude went into behavior. “Sir, do you think you could control your children a little? They’re very upsetting to people.” “Oh, yeah,” he lifted his head as if to come to an awareness of what was happening. “Yeah, I don’t know. I just guess I should. We just left the hospital. Their mother died just about an hour ago, and I guess they don’t know how to take it, and frankly I don’t either.”

Imagine the paradigm shift that took place there.

Imagine now what the attitude and the behavior would be based upon that paradigm.

Can you see why paradigms are deeper than attitude or behavior? And, you know, even though we’re talking here in personal and interpersonal ways, the same thing takes place throughout our whole society.

Thomas Kuhn in his brilliant book, “The Structure of Scientific Revolutions,” points out so powerfully and consistently all the significant breakthroughs or break-withs old ways of thinking. Einstein, who rewrote physics, he made this brilliant statement: “The significant problems we face cannot be solved at the same level of thinking we were at when we created them.”

You see, it causes us to be reflective and introspective, to explore our own paradigms. Most people focus upon behavior and upon attitude, and both of those are, of course, very important. But far more fundamental than either behavior or attitude is a paradigm.