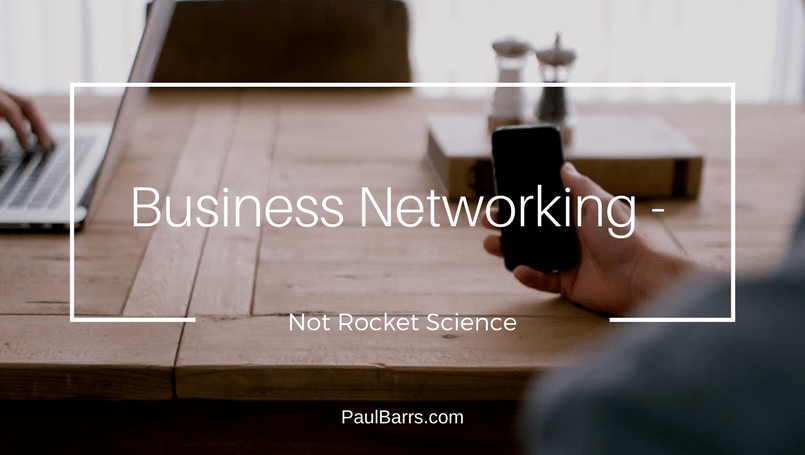 13 May Business Networking – Not Rocket Science

Posted at 07:00h in Business Basics by Paul Barrs

How much time do you spend attending ‘networking events’ in the local area? Have you noticed that there seem to be some people who are at all the events? I bet ‘they’ spend more time than you or I do… but the thing is it’s not the TIME that’s important, it’s the QUALITY of time that matters most. How we spend that time for the reward received.

There are three groups of people in the ‘business events networking game’.

(1) Those that go to events with the sole purpose of pressing the flesh and getting leads. They’re there to promote what they do and seek out those who are potential prospects to talk / do business with later.

(2) Those who attend events because they know it’s good to be there and to put their face in front of others who already know them. They don’t go in for the hard sell but they understand the wisdom of ‘staying in touch’ with potential prospects.

(3) Then there are those who go to events because they GO to events. Not only is it important to be there, it’s IMPORTANT to be there (subtle difference!). It’s the social thing, the butterfly, the ‘being seen’ that matters most.

Though many of us would be shy to admit it, we’re more likely to be one of these than the other; and there’s nothing wrong with that, each serve their purpose.

Chances are though, we’re more than just one – and that’s where the best results are wrought.

The thing is though; the thing that we “miss” is that these same principles apply online with social media through groups and ‘networks’. And while most of us would say “I don’t have time for such things”, if you were to compare it to the time you may spend at various ‘real world’ networking events for the return received (and don’t deceive yourself – there IS a return sought from these events, even if it’s only intrinsic) – when you look at the time v return ratio, you may find that similar time given to Online Networking opportunities can return an even higher ROI.

I’m a ‘member’ of 2 different online communities (groups); one on Facebook and one on LinkedIn. My time commitment to these is occasional but each time I contribute I make it count and I make it worthwhile for others in the group.

Did you notice that keyword, contribute?

I add VALUE to the group and it returns value to me, yes, REAL value, tens of thousands of dollars in sales and services each year.

The keys to making this happen are (1) make sure you become involved in the right ‘groups’. The two I mentioned before are targeted to local Queensland businesses. (2) When you get involved actually get INVOLVED. Participate in conversations, answer questions – add value! And (3) when an opportunity comes up to offer your products / services in answer to someone else’s need do so without a bullish approach. Be gentle, be humble, and be willing to help.

Just as you would (or should?) in a more traditional ‘offline’ networking situation.